#The War for Attention

Your attention is limited and therefore has value to companies. They need you to look at ads while using their services, so that they make money.

The more time you spend looking at that screen the better for them.

So naturally this is what they optimise for. Since we now have a screen in our pockets, companies use it. They are so good at drawing us in, that they made us look at screens more often than we might want. Or worse, we don’t even realise anymore how often we use it unintentionally.

The problem is that we are humans and can be persuaded to do things we don’t want, even if we know the techniques behind it.

Tristan Harris gave a great talk about it:

What needs to happen that you’d call yourself addicted to your phone/a service?

Maybe addiction might be too strong. On the other side I don’t know what needs to happen that I would call myself addicted to an online service.

It had to stop. This is not how I want to spend my time.

#The Fear of Missing Out

The problem is sometimes there is really good stuff on twitter. Also how do you keep up with the software industry or other topics you are interested in?

This is how you get addicted. You never know if you’ll get your shot of dopamine. So you will try your luck until you do.

Since I am a programmer and twitter has an API, I decided to do something about it. I wrote my own “twitter client”.

Here is how I solved my problems with twitter:

I get a daily email with my twitter timeline.

This solves the fear of missing out, because whenever my need for a shot of twitter dopamine kicks in I can now think: “I’ll see what’s up later today.” I’ve already noticed that the longer I use my service, the less frequent I have this thought.

Another advantage is that my mails stay in my inbox. So in case I won’t check twitter for a while I can still read the tweets of each day by opening the according mail.

Browsing my twitter timeline is pleasant now, since I get it in daily partitions. It’s very handy if I want to find that tweet, which I read three days ago.

My emails only show author, text and media of a tweet. The number of retweets or likes or at which time the tweet was sent is just noise. Twitter shows it in realtime and I don’t care.

Some weeks ago twitter started showing likes in my timeline, which often results in seeing tweets twice if a person likes and then retweets a tweet. The twitter timeline endpoint does not include them, so likes are gone as well.

Last but not least there are no ads in my timeline, because this is also not part of the twitter API.

This is how it looks like on my phone’s email client (Unibox): 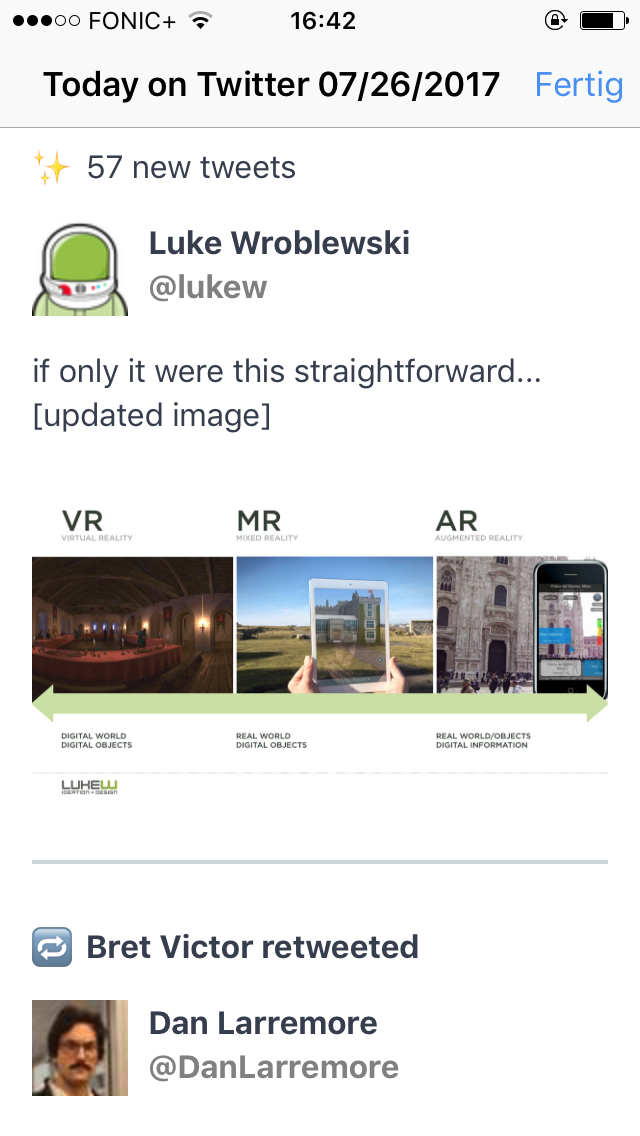 I haven’t written software, which had a bigger impact on my daily life than this one. I’m sure it would be similar for anyone using twitter.

Nevertheless I still don’t know if I should put the code online, since it always results in some form of questions/feedback. It took me a day to implement using the twitter API, so if you know programming use it. If you are a designer read more about the time well spent movement.

I wish social networks would try to minimise the time we spend on their services. Unfortunately this does not work with advertising as a business model. There is a reason good things cost money.

Regarding twitter I’m happy with my little service. I deleted the app and rarely open its website.

It has already changed what I think and do every day.